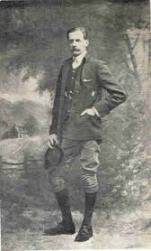 Capt. the Hon. Otway Frederick Seymour Cuffe, Gentleman usher to King Edward VII, Gaelic Leaguer, Home Ruler, Industrial Revolutionist and munificient benefactor to the city of Kilkenny was born in London in 1853, the third and youngest son of the 3rd Earl of Desart of Desart Court near Cuffesgrange, Co. Kilkenny. He spent a short time in the British army, served in the Ashanti campaign and became ADC to the Duke of Connaught before resigning his commission and going into business first in London and later in America. He returned to live in Kilkenny in 1899 on the death of his eldest brother. Cuffe soon became immersed in the social life of Kilkenny and with his sister-in-law, Ellen Countess of Desart, he was instrumental in reviving some of the industries for which Kilkenny formerly had been famous. He founded the Kilkenny Social and Gymnastics Club. With Lady Desart he established the Greenvale Woollen Mills, an experimental tobacco farm and a Guild of Woodworkers. He became President of the Kilkenny branch of the Gaelic League in 1904 and kept that position until his sudden death in 1912. He was twice elected Mayor of Kilkenny in 1907 and 1908. He was a personal friend of Douglas Hyde, founder of the Gaelic League and first President of Ireland. Hyde visited Kilkenny in 1900 to receive the Freedom of the City.(Dr. Douglas Hyde’s visit to Kilkenny in 1900). Cuffe entertained him lavishly in Sheestown House.

Ellen Countess of Desart is outstanding among the benefactors of Kilkenny. She was a prominent member of the Gaelic League. After the death of her husband Lady Desart left her house in Cuffesgrange and moved to her home in Aut Even (a transcription of Áit Aoibhinn, the Irish for Beautiful Place) on the outskirts of Kilkenny City. She was interested in the Gaelic Revival of the time and became a member of the Gaelic League and was elected its president, succeeding her brother-in-law, Capt. Otway Cuffe, who was mayor of Kilkenny. It was not until she was widowed that she took an active part in the affairs of Kilkenny. At this time , her brother-in-law, Captain Otway Cuffe, was living in Sheestown and was anxious too to help Kilkenny in all possible ways. Both himself and Lady Desat found great joy in the Gaelic League which had been established in 1897, and all it stood for, its music, its drama, its dancing. 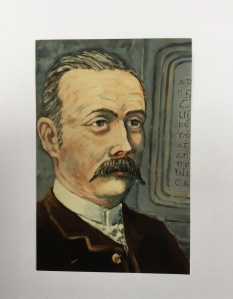 At a branch meeting of September 1Oth 1901, it was decided to employ Miss Eileen Cronin from Ballingeary as a teacher to the League classes at an annual salary of £40. Being a native speaker she did not have much English when she first came and it is said that before her arrival a piece of material from her coat was sent on in advance for easier recognition in case there might be language problems! To give her a knowledge of English Tim Hanrahan arranged for her to attend classes at the Presentation Convent for six months while he paid all her expenses. When she arrived Irish was being taught in the C.B.S., James’s St. and the De La Salle Brothers in St. John’s and Patrick St.. In the year 1902-03, Miss Cronin had classes in Sheestown (30 pupils), Johnswell, Urlingford, Castlecomer, Tullaroan, Thomastown, Callan, Technical School and in the Model School for painters and decorators. In 1905 a class for printers and one for stonecutters and masons was also held in the Technical School. A study of Miss Cronin’s schedule for 1906 shows that from Monday-Friday every minute from 6-10 p.m. was employed in classes as well as taking pupils at five city schools before 10 a.m. or after 3 p.m. as was the law at the time. Minutes 10th September 1901 Learn More 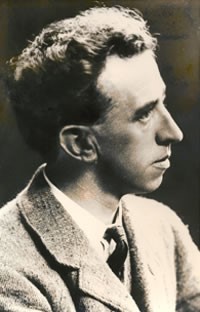 Thomas McDonagh is best known as one of the leaders of the Easter Rising of 1916 and is the only Tipperary signatory of the Proclamation of the provisional Government. His parents, Joseph McDonagh and Mary Louise Parker, came to Cloughjordan in 1877 as the first teachers in the newly opened catholic school. They arrived, with their daughters Mary and Eleanor, from Cloghan, Co. Offaly. Thomas (born on Feb. 1st 1878) and his brothers John, Joseph and Jim were born in Cloughjordan.

Thomas was sent to Rockwell College in 1894, where he remained on as a trainee teacher intending to join the Order of the Holy Ghost Congregation. Finding he did not have a vocation, he moved to a post, teaching English and French at St. Kieran’s College, Kilkenny. While here he became deeply involved in the Gaelic League. At this time he published his first collection of poetry Through the Ivory Gate.